You are here: Home / Politics / Harris County / Houston does not have a revenue cap

My former colleagues at the Houston Chronicle editorial board opined this week that the City’s property tax cap should be repealed and that the tax increment reinvestment zones (TIRZs) need to be reformed. [Click here to read.] They are wrong on the first count but right on the second one.

To begin, let’s get some facts straight that were mangled in the editorial.

Repeal advocates insist on mischaracterizing the limitation as a “revenue” cap to mislead the public into believing that the City’s ability to raise any form of revenue is impaired by the restriction. But since the charter amendment was enacted, City revenues have increased by a whopping $2 billion (67%), including the enactment of the drainage fee, which was the largest single tax increase in the City’s history. 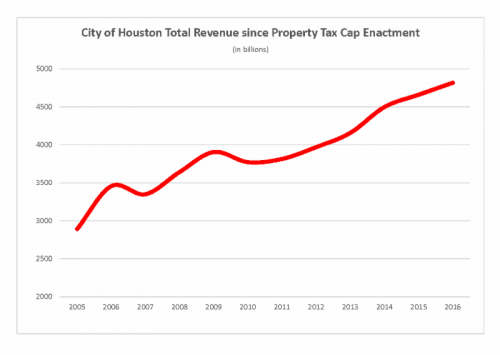 Third, and most importantly, the property tax cap repeal advocates always omit that the charter amendment begins with this clause: “The City Council shall not, without voter approval . . .” In other words, in any year that the Mayor and Council believe that the City needs more tax revenue than the limitation allows, all they need to do is ask for the voters’ approval. If they feel handcuffed by the charter amendment it can only be because they believe they cannot make a credible case to the taxpayers to pay more.

My former colleagues are right about the detrimental effect the TIRZs are having on the City’s finances. Last year, the TIRZs collected $132 million in property taxes, nearly 14% of the City’s total property taxes. That is more money than the drainage fee brought in last year. 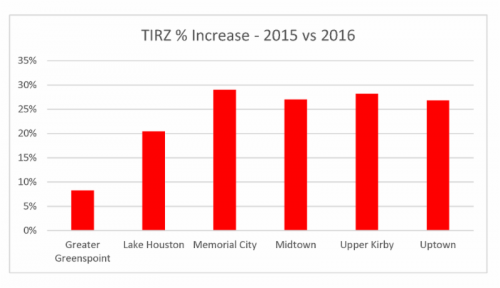 Of course, the City has devised a number of clever ways to claw back more and more of this revenue over time and subvert the voters’ intention as expressed in the cap. Each TIRZ pays the City an administrative fee and most make other contributions toward “shared” expenses. But there is no question that if the City had all of this revenue back, it would go a long way toward solving its long-term structural deficit.

One of the challenges in bringing any of this revenue back to the City is that the TIRZs have been on a debt binge in recent years. They currently owe around half a billion dollars. So, much of their revenue is committed to repaying that debt. Of course, voters had no say in the creation of this debt, notwithstanding that property taxes will be used to repay it.

There are certainly some good projects that are undertaken by the TIRZs. But increasingly they are grasping for projects on which to spend their largess; witness the idiotic $200 million bus lane project in Uptown.

Of course, our benevolent State Legislature has its finger in all of this. All of the TIRZs were created by state statute. So, the State will have to be involved in any restructuring. Given numerous conflicts of interests between our local delegation and the TIRZs and their first cousins, the management districts, good luck with that.