Lise Olsen is back on the track of Rep. Steve Stockman’s finances in the Houston Chronicle. But I gotta say, her latest story is sorely lacking in information regarding campaign finance and looks like little more than an attack piece written by the hyper-aggressive Cornyn campaign. Here are a few quotes from the article:

The campaign of U.S. Rep. Steve Stockman, a Clear Lake Republican now making a U.S. Senate bid, again has been questioned by the Federal Election Commission in a Dec. 20 letter for allegedly “excessive contributions”…

The donations were made from personal funds and were intended for the congressman’s House primary and general election accounts.

Okay, so what we have here are TWO donors, one giving $5,100 in donations and one giving $5,000. They confirm that the donations are intended for TWO elections, the primary and the general.

So, what, pray tell, is the problem here?

The law is CLEAR. The maximum donation for EACH election is $2,600. The fact is that one of the two donors could have given $100 more and the other donor could have give $200 more.

But reporters Olsen and Jayme Fraser fail to mention that FACT in their hatchet job on Stockman. They really must not like that guy. Or, they really must like someone on Cornyn’s staff. Either way, the CONSUMER, i.e. the READER of that piece doesn’t get a true picture of what is happening here. FEC letters like this go out all the time and campaigns clarify that the donations were for two elections ALL THE TIME. And maximum donations split into primary and general elections happen ALL THE TIME.

In fact, let’s take a look at the donations to Sen. John Cornyn’s primary campaign account, Texans for Senator John Cornyn Inc, from the Chairman and CEO of the Bechtel Corporation, Riley P. Bechtel. Mr. Bechtel, who happens to live in San Francisco, CA, donated the maximum amount of $2,600 to Cornyn for both the primary and the general elections.

Take a browse through Texans for Senator John Cornyn Inc’s October filing and you will find dozens of examples of that. Candidates don’t raise $8.5 million in one election cycle 10 bucks at a time from the grassroots. No, it comes from heirs to fortunes like Bechtel that live in California and have plenty of government contracts to protect.

But for some reason, reporters Olsen and Fraser don’t think it is important for their readers to know that.

And if you want to know how the Texas media works (actually, works is a misnomer as they are lazy), take a look at the support these reporters get from the Dallas Morning News’ Washington Bureau Chief Todd Gillman: 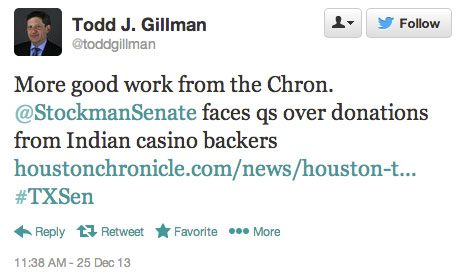