by Guest
in National
9 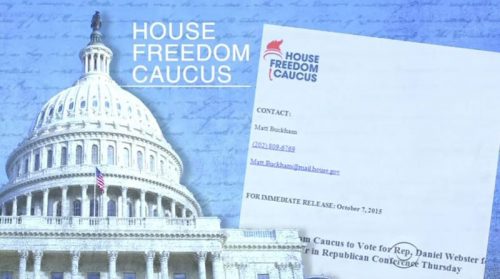 I supported the American Health Care Act last Friday because it was the right vote. I didn’t begin as a big fan, but I ended up satisfied that America needed this bill to start a process to repair our healthcare system.

Yes, I’m a conservative. I pal around with those liberty-loving Freedom Caucus guys. I get better grades on conservative scorecards than I ever received in college. And frankly, if you asked the Speaker, I think he’d tell you I’m a bit of a right-wing rabble-rouser.

I supported the AHCA, and will continue to support it, because a yes vote is the principled, conservative position.The repeal of ObamaCare stands as one of Republicans’ greatest, most enduring promises to the nation, the fulfilment of which matters to our livelihood and our country’s future. As ObamaCare continues its death spiral, families across the nation face unaffordable premiums and deductibles and severely limited healthcare choices.

Since 2010, individual premiums have gone up 27 percent and deductibles have soared. Every day, my office fields calls from families who can’t afford to pay their $12,000 deductible, effectively making them uninsured. Meanwhile, several counties in my district only have one remaining insurer in the ObamaCare marketplace.

Our mandate, our duty to the people, is to improve upon the current mess. And the American Health Care Act is an improvement, one that came with three parts.

The first part, a promising reform of the Medicaid program, should be cheered by all Republicans. The bill’s per capita allotment would force spending restraint and reform within the Medicaid system.

The next part was the actual repeal of ObamaCare, those strangling regulations of the insurance market that only help some of the people they’re supposed to help — another policy win for the conservative cause.

The final part of the AHCA was a replacement for ObamaCare, and it’s with this third part that Republicans disagreed.

I’ll be clear: I criticized the process we followed to arrive at this bill. We went too fast. We held hearings, but they were not recent and failed to create a consensus in this country. We left out important provisions.

But ultimately, this bill was worth supporting.

The president has been good to conservatives. In fact, much of his first several weeks in office have been a boon for the conservative cause: from a strong set of Cabinet picks to a rock star Supreme Court pick to a set of executive orders and regulatory repeals that undo the most dangerous parts of President Obama’s pen-and-phone legacy.

Moreover, Speaker Paul Ryan (R-Wis.) has been good to conservatives. He negotiated in good faith and offered real, conservative changes to the bill. We won provisions that allowed states to impose a work requirement for Medicaid and choose optional block grant fundi

ng for the program. We added a roll-back of mandated essential health benefits.

The president has earned our support. Our party leaders deserve our faith. The AHCA vote in the House would have been the first part of a three-pronged approach to repeal and replace ObamaCare, the first stop on a long journey towards a better, more conservative healthcare system. I trust President Trump to orchestrate a conservative final outcome.

In fact, we have to trust the president and party leaders, because the law requires a meandering path through Senate rules and administrative action before we can arrive at a better system.

To pass the requirements of budget reconciliation, our ideal healthcare plan had to be uncomfortably packaged into a specific kind of bill so that it only included provisions that impact the budget and not some of the key provisions needed to set up a true alternative insurance market structure. The missing provisions were already in the works in both the legislative and executive branches.

Republicans need to remember that pragmatism and principle are not opposed. Instead, pragmatism is an instrument used in pursuit of principle. By shooting down step one in the repeal and replacement of ObamaCare, we failed to achieve the principle: saving the American people from the hell that is ObamaCare.

In fact, our entire agenda of principled conservative policy relies heavily on healthcare action. Without a successful repeal of ObamaCare, tax reform will be that much harder to achieve.

Transitioning from an opposition party to the governing party can come with growing pains. But if we want to achieve our principled outcomes, like the end of ObamaCare and its replacement with a free-market system, then we have to learn how to come together as a party and govern. And governing means supporting the AHCA. I supported it, will continue to support it, and encourage my colleagues to support it as well.

When a Corridor is a Cap