You are here: Home / Politics / Harris County / Gene Green Town Hall 9-1: 65% of My District is Hispanic

This one was pretty much like the others in that the room was relatively small and about half of the prospective attendees could not get inside. There were a total of 126 chairs set up and every single one of them was filled. The constables did not allow people to stand around the walls as in other meetings due to strict fire codes in Pasadena. Speaking of constables, there was a heavy presence of law enforcement officials, I’d guess a half dozen constables from Prct. 2 and a dozen or more Pasadena Police Officers, which is very similar to Rep. Green’s other meetings.

As usual, Rep. Green started out with a standard stump speech, in which he touches on the stimulus funds he was able to procure for the district, the Cap/Trade bill that he voted for and the current health care debate. He noted that most projects are coming in under budget, which means that money is “leftover” and he will try to divert some of that to the district to be used for roads and highways. Once again he talked about obtaining $98 million to dredge the Port, which he says is about five times the amount he is normally able to get per year.

Standard stuff but there was actually some newsworthy material to come out of this meeting. First, he is beginning to feel the heat on his vote for the Cap/Trade bill. So much so that his speech now includes the fact that he didn’t introduce the bill, it wasn’t something he would ever introduce but that the Democratic leadership decided they wanted it, so he had to vote for it if he wanted to make it better. That is a long way from his defiant approach at the first town hall on August 3rd. The very first questioner, Connie Boykin, calls him on that.

otice his reaction 37 seconds into that video when she says that he voted against his constituents on the Cap/Trade and now she understands that he did it because the Democratic leadership told him to. His answer is no, that is not the reason, the reason is “because I got a half a loaf for our refineries”. Interesting and as I’ve been saying all along, that should be something that his opposition attacks early and often if they want to beat him.

The second bit of news also came from that first questioner. The lady continues blasting him for not representing his constituents and wants to know why he is supporting the health care reform bill (HR 3200) against their wishes. Check out his answer at the 2:16 mark of the video above. For the first time, Rep. Green admits what any but the most casual observer already knows: he is voting for health care reform because 65% of his district is Hispanic. Now, in itself, that isn’t really newsworthy because we already know that. But it is the way he says it, not simply the words. He looks this woman straight in the eye, tells her that town hall meetings are not representative of his district, tells her that everyone there came out because they wanted to, then says 65% of his district is Hispanic and sort of shrugs his shoulders as he looks at all the white folks in the room. Finally, after eight meetings, it is laid out on the table for all to see.

The very next questioner takes major exception to this. Former Marine Josh Ramirez tells Rep. Green in no uncertain terms that he is not happy with the 65% remark, talks about most of them being here illegally, dismisses many without insurance as having made a lifestyle choice not to pay for it and in general is a very effective citizen questioner.

Surprisingly, there was yet another very effective questioner at this one. King Ivey, a 33 year constituent of Rep. Green if you consider his time in the state legislature, really takes him to task over the entire health care debate and how he and the Democrats are not considering other options.

Now that, my friends, is the way to get your point across at a town hall meeting. Notice that Mr. Ivey wasn’t disruptive, didn’t call Rep. Green a commie liberal and overall showed respect while being very passionate on the issues.

The meeting was not without its bizarre moments. Sherry Young, who said she works at Red Bluff Elementary and is a missionary overseas, is very concerned that the bill will not allow her to choose a Christian doctor, forcing a Muslim man to get between her and a sheet. Seriously.

Now, me personally, if I need a doctor, I’m not going to take the time to ask them about their religious beliefs. And it makes me wonder what kind of missionary work Mrs. Young is doing. That isn’t the type of Christianity I’m familiar with. This would be more like mine:

Now that is what I’m talking about. But I digress.

Rep. Green is vulnerable in 2010, at least at this point in time. I think it is far too early to predict, as many of my conservative friends are, a complete wipeout of the Democrats next year because I think the furor peaked too early. President Obama’s ratings will eventually stop their slide and that will help Rep. Green. Another factor to consider is the ineptness of the Harris County Republican Party, they aren’t going to have an impact without a complete turnover in leadership. So it is going to be up to the candidate, whomever it turns out to be, to win that race.

Which brings me to Frank Mazzapica. He was at the meeting passing out push cards with his son Nathan. Positive is his name, he doesn’t seem to let anything get under his skin, I know that because I’ve tried. Here he is trying to convince Mr. Ivey to vote for him and getting some help from Chaplain Benjamin McGregor. 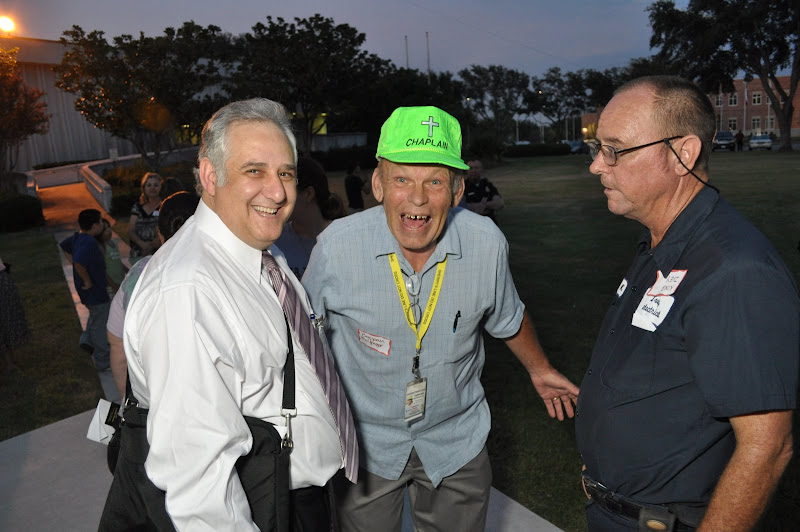 See what I mean about putting the fun back in FUNdamentalism? That guy is enjoying life at the same time he’s helping defeat a liberal congressman.

Obviously, the kids at DailyKOS and Huffington Post are going to have fun mocking Mrs. Young, as well they should. But I hope that most people take away from this meeting the fact that Mr. Green is playing racial politics. Maybe it is time that the people of the 29th rose up and said enough of that.