by Guest
in 85th Texas Legislature
13 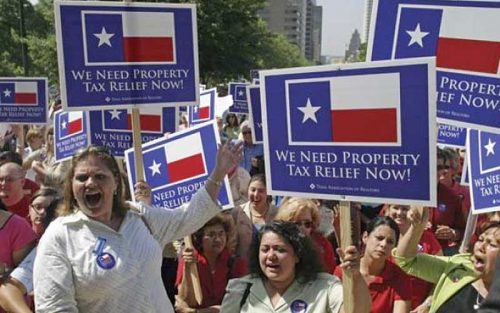 I am increasingly disappointed by government and organization opposition to Senate Bill 2 (Texas Property Tax Reform and Relief Act) filed by Senators Bettencourt, Creighton, Hancock and Taylor (Van). Disappointment blossomed into outrage upon discovery that my school district is pursuing hiring uncertified teachers and is constructing a new boardroom, my city aims to build dog parks (in a city where the average lot is over half an acre), my county has spent a million dollars on a single lawsuit, and the drainage district isn’t really accomplishing its mission to reduce flooding.

When President Kennedy challenged us to, “…ask not what your country can do for you – ask what you can do for your country…” I do not believe he intended that we provide unbridled access to our bank accounts, yet that is what appears to be occurring at the local level. The growing government opposition to SB 2 is an example of that with local officials aligning themselves against an effort designed to establish automatic controls over tax increases – necessary because of governmental effort to do all they can – not only what they should.

Property taxes in Texas have been out of control for decades thanks to ever increasing property values. Many governments held the line on tax increases but have enjoyed the additional income resulting from a growing tax base. In hearing after hearing across Texas last year, anxious and anguished taxpayers begged the Senate Select Committee on Appraisal Reform to do something. SB2 was filed in response.

The bone of contention by governments arises from a mandatory limit on revenue to 4{997ab4c1e65fa660c64e6dfea23d436a73c89d6254ad3ae72f887cf583448986} above the prior year (plus debt) with an automatic election if revenues increase beyond that limit. This is necessary, in large part, because of the myriad dates and times local governments meet to discuss taxes and spending. Citizens do not have time to babysit local government actions thus automatic controls when taxes are involved – a blessing for Texas families.

Personally, I believe 4{997ab4c1e65fa660c64e6dfea23d436a73c89d6254ad3ae72f887cf583448986} is a pretty good pay increase, certainly more than most receive. Add to that the government “savings accounts” – funds held in “reserve” – that often accumulate from underestimation of revenue year-after-year-after-year. I am thrilled my government is solid because of robust savings but my reserves for three to four months of expenses plus three to four months of debt was drained to create this for them. While we tightened our belts, government tightened the noose and weighed us down with unreasonable tax burdens.

So, taxpayers unite! The time has arrived to stand together against out of control government spending. Local governments will use your money to fight for their right to tax without forced limit and accountability. It takes minutes a day to communicate online with your legislators (find them at www.capitol.state.tx.us), to post on Facebook, Pinterest or Nextdoor. Pick up the phone and call your State Rep and Senate office. Voice your opinion because government special interest will be voicing theirs as tax reform is hotly debated in the Texas Capitol this spring.