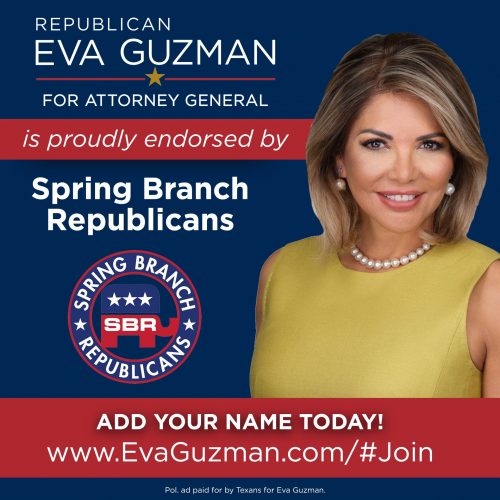 “Through challenging circumstances, Texas has been served well by the conservative leadership of Attorney General Ken Paxton. We are grateful for his service, but also believe that Texas is at a political crossroads where Republicans must do much more to fight back against the lawless left-wing Democrats. Moving forward, we must work even harder to win elections for our party and our values on a fast-changing political landscape.

The Republican Party needs highly qualified leaders who not only fight for our values, but also who strengthen and grow our party for the future. No Texan better embodies these qualities than former Texas Supreme Court Justice Eva Guzman. Throughout her 22 years of distinguished public service, Justice Guzman has been an inspiring voice for conservative values, both in Republican circles and in communities outside of the political realm. That is why it was no surprise when, in 2016, Justice Guzman received more votes than any candidate in Texas electoral history, both in the Republican Primary and General Election, surpassing even then President-Elect Donald J. Trump on the statewide ballot.

Working her way up from humble beginnings to law school, Justice Guzman has lived an exemplary life of achievement as an attorney, family court judge, Justice on the 14th Court of Appeals, and for the past 12 years as a Justice on the Texas Supreme Court. Most importantly, she is a proud mother, sister, aunt, and wife of a career law enforcement officer, whose life is guided by faith and family. From her advanced law degree at Duke University, where she had the opportunity to study under esteemed scholars like the late U.S. Supreme Court Justice Antonin Scalia, to her decades of judicial experience ruling on thousands of complex civil and criminal cases, no Texan in public life today exceeds Justice Guzman in legal acumen and experience, and no other candidate outshines Eva Guzman in terms of her character, leadership ability, and her passion for constitutional and traditional conservative values.

One of the things we love about President Trump is that he is loyal to his friends, often rewarding them with endorsements. To so many conservative activists around Texas, Eva Guzman is much more than a friend – she is family. Justice Guzman is an unquestionably proven conservative who we know well and who we trust to serve and protect the great State of Texas. That is why Spring Branch Republicans proudly endorses Eva Guzman for Attorney General of the State of Texas.”

That comes from long-time board member Joseph McReynolds and is not unexpected. I think that the key to his note is this line:

Moving forward, we must work even harder to win elections for our party and our values on a fast-changing political landscape.

I don’t think that there is any doubt among observers of the Texas political scene that Guzman is the most electable of the three current candidates in a general election. She has charisma, experience, looks the part and is an eloquent speaker.

The problem for Guzman is winning the primary. Are there enough Republican primary voters left that are willing to put party before principle? I know that Paxton is morally and ethically compromised but the grassroots primary voters love the guy. He throws them red meat constantly, even though he mostly loses those lawsuits he files. And don’t forget, Trump endorsed him.

Notice I didn’t mention P Bush. Who cares about that guy? Snowball’s chance if you ask me.

Guzman and her team have their work cut out. for them. She’s dead last in the money race, with $610k cash on hand versus $6.84 million for Paxton. P has $2.7 million. Money doesn’t always win elections but it certainly helps, especially in a statewide race in Texas.

But it’s early, perhaps she can pull a rabbit out of a hat.