You are here: Home / Politics / Harris County / Different Visions for the Future

The chatter of what attributes will make a good chair show that the party is as divided as ever locally. Tonight’s HCRP vote for a new chair leaves the county party at a distinct crossroads.    Regardless of who prevails tonight the party has to make a decision on how to proceed.

The pathways forward all, to some degree, involve how to build coalitions within the major voting blocks that exist in the nonpartisan municipal elections.  Those blocks are white democrats, black democrats, conservatives, and Hispanics.  While others exist they are more fragmented and/or too low in population to build from.

Out of the blocks the Hispanics are the least influential as was shown in the last municipal election.  Districts J and F were drawn to have a Hispanic win office, but Councilmembers Pollard and Thomas won respectively. Councilman Pollard won over a formidable Hispanic in the runoff further reinforcing the weaker nature of the Hispanic block.

The chatter regarding what’s important in the new chair shows the divide in strategy on how the party should proceed.  Some insist that pushing our economic message is the best way forward in that if people are prosperous they will vote for us, or various iterations of this message.  Others say that expanding the base is the way forward, that the County has become light blue, and we must flip voters in the County to have a chance to prevail in the future.  Still others say that we have to focus on social issues more than fiscal issues in order to have success.  All the other chatter has been either inside party grudges/mechanics, or a variation of the three basic arguments.

While 2022 is important in that it is the next election the cycle is also important because some of the bond to murder judges are up for reelection.  Judge Hidalgo is also up for reelection and winning that race would flip Commissioner’s Court back to Republican control.  However, that’s only half the picture.

The County Power Divide is Deepening

Although I believe Kevin Fulton is the best choice for chair of the 5 announced candidates that’s not a negative on Cindy Siegel.  She has many strengths she could bring as party chair.  Her run for Commissioner is a good race to use to show how the party has shifted in the county.  Both she and Commissioner elect Ramsey come from republican areas in the county.  With Covid dampening the ability to campaign the race was more of a testament to where the republican power in the precinct lies.

The results show that Bellaire, while still an important republican area in the county, is not enough to win the precinct.  The republican power in the county has shifted, by and large, to outside the beltway.  This thesis is further supported by the two state house seats flipping.,  Sarah Davis’ district is now blue showing that the area inside the beltway is trending light blue.  Again, this isn’t a knock against Cindy Siegel.  This is solely used for illustrative purposes.

Whipping Up Outside the City Votes

With the City versus County political affiliation becoming more divided the potential pathways forward countywide are to whip up turnout outside the city or try and convert voters inside the city.  Both pathways have arguable chances for success.  With Trump not at the top of the ticket in 2022, and no US Senate race at the top of the ticket we are unlikely to see as much democratic turnout.  Cruz didn’t effectively blunt Betomania in Harris County, and Trump was enough to ensure mass democrat turnout last month.

Without a top of the ticket force to drive democrats to the ballot there should be some degree of decline in the democrat turnout.  If the outside the city voters can be whipped up to come out in numbers similar to the last two cycles the gap will narrow.  With crime already showing up in the voting, and the very judges who are making the crime problem worse up for reelection, it’s not unreasonable to think at least those seats can be flipped in the next cycle with strong republican turnout outside the city.  The additional benefit of this pathway is it will help to counteract some of the discontent with Abbott and make undervoteing in that race less likely.

Expanding the Base Within the City

The other pathway forward is to expand the voting base within the city.  This tactic has the obvious advantage of having a double impact.  Each voter you can switch is one less vote for the democrats and one more vote for the republicans.  This tactic also has the added benefit of possible carryover into the municipal elections in 2023.  The long term benefits of this tactic are far in excess of the other pathway forward, but there is greater risk in this pathway.

The republican version of economic messaging isn’t likely to resonate well with the voting blocks that do not vote with us.  Fiscal responsibility is important, but it is not popular.  The image below is a 2016 voter plot (national level) where voters identified on social and fiscal scales.  A distinct majority of the population is not fiscally conservative. 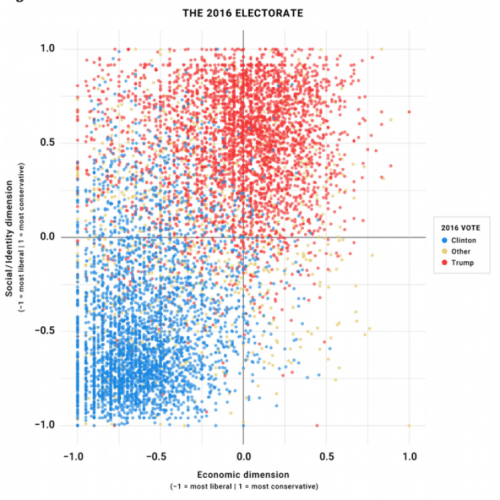 To try and use economic messaging to expand the voting base means to preach a different economic message that will resonate with the target audience.  That message is economic impact zones.  It’s making capital available for economic prosperity.  That message is making education affordable and forgiving debt to make life easier.  It’s not traditional republican messaging.  However, Trump out performing among minority voters shows that messaging works.  It’s a message we could use and enact, but it will come at cost to the traditional fiscal conservative message which creates division in the party.

Social issues have also shown to be effective in building alliances.  The bathroom bill is one example, but right to life issues also resonate strongly in the Hispanic and Filipino populations.  Attempting to rebuild the social issue coalition along with beating the tough on crime drum has a good chance of getting ticket splitting on the bottom of the ballot with the vulnerable judges up for reelection and can expand the base.  But it comes at a price with the existing economy first message republicans outside the city.

Which Path is Better?

The pathways forward are not mutually exclusive, but it will be difficult to try and achieve both at the same time before the 2022 election. The short time frame raises the question of which path is the better way forward?  Some of that answer lies in how well will HCRP cooperate under the new chair.  From everything that has transpired in this relatively opaque process of choosing a new chair it doesn’t look promising for HCRP to have a peaceful coexistence within the short term.

The likelihood of more fighting makes it difficult to believe that continuing the current trends of relying on ground game and message continuation is the better pathway ahead.  If we could put our differences aside for the sake of getting rid of the vulnerable judges and gaining a seat at the table for 2023 that would be the less risky path forward, and it would have a chance of success.

With the likelihood of intraparty fighting continuing trying to build for the future seems a more promising route to go.  Hopefully everyone sees defeating the vulnerable judges as the easiest pathway to stem the blue wipe outs that have been occurring.  Focusing on that task leads more naturally to connecting with voters who don’t normally vote with us.  Establishing those relationships along with economic and social messaging that’s more likely to resonate with the respective voting blocks is a natural way to expand the base.

Will it cost us some votes with traditional economic messaging adherents?  Doubtless yes.  However, the ability to split the ticket at the local level and have better relationships going into 2023 seems to be the wiser course of action, especially with much of the conservative voting strength residing outside of Houston proper.  This engage and expand the base is the pathway that’s more likely to have benefits in 2023 and is a better pathway forward.