You are here: Home / Politics / State / Speaker Joe Straus: the most courageous politician in Texas?

Yes, I think that Republican State Rep. Joe Straus, who happens to be the Speaker of the Texas House of Representatives, is the most courageous politician in Texas. Via Facebook:

Today I am sending a letter to my fellow members of the State Preservation Board regarding the Children of the Confederacy Creed plaque on the first floor of the Capitol.

Confederate monuments and plaques are understandably important to many Texans. But it is important that the historical information displayed on the Capitol grounds is accurate and appropriate. The Children of the Confederacy Creed plaque does not meet this standard. The plaque says that the Civil War was not an act of rebellion and was not primarily about slavery. This is not accurate, and Texans are not well-served by incorrect information about our history.

Those of us who serve on the State Preservation Board should direct staff to identify the steps necessary to remove this plaque as soon as practicable. Texans should expect to see an accurate depiction of history when they visit their state Capitol. As I have stated before, I also believe that Preservation Board Staff should study the historical accuracy and context of other symbols on the Capitol grounds. For example, some of the language that explains and describes monuments may need updating. We have an obligation to all the people we serve to ensure that our history is described correctly, especially when it comes to a subject as painful as slavery.

To any objective observer of this, Speaker Straus is completely accurate in his remarks. Before you tell me about ‘erasing history’ or any of the other nonsense that people who support idolizing Confederate soldiers and institutions put forth, how about we actually read what this plaque says? 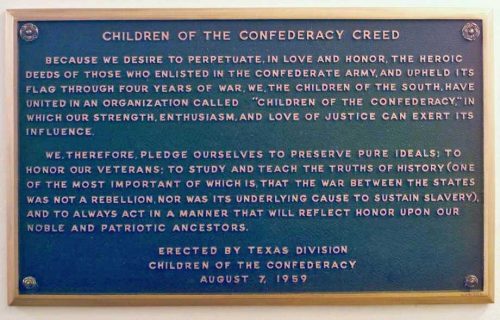 This line is the problem:

To study and teach the truths of history (one of the most important of which is that the ware between the states was not a rebellion, nor was its underlying cause to sustain slavery).

As with any war, there are many nuances as to why the war started and rarely any singular ’cause’ of war. And such would be the case of the US Civil War. But especially for those of us that live in Texas, it is patently false to say that sustaining slavery wasn’t the or an underlying cause. Let’s read from the Declaration of Causes that led to Texas’ secession from the Union:

Texas abandoned her separate national existence and consented to become one of the Confederated States to promote her welfare, insure domestic tranquility [sic] and secure more substantially the blessings of peace and liberty to her people. She was received into the confederacy with her own constitution, under the guarantee of the federal constitution and the compact of annexation, that she should enjoy these blessings. She was received as a commonwealth holding, maintaining and protecting the institution known as negro slavery–the servitude of the African to the white race within her limits–a relation that had existed from the first settlement of her wilderness by the white race, and which her people intended should exist in all future time. Her institutions and geographical position established the strongest ties between her and other slave-holding States of the confederacy. Those ties have been strengthened by association. But what has been the course of the government of the United States, and of the people and authorities of the non-slave-holding States, since our connection with them?

The controlling majority of the Federal Government, under various pretences and disguises, has so administered the same as to exclude the citizens of the Southern States, unless under odious and unconstitutional restrictions, from all the immense territory owned in common by all the States on the Pacific Ocean, for the avowed purpose of acquiring sufficient power in the common government to use it as a means of destroying the institutions of Texas and her sister slave-holding States.

When we advert to the course of individual non-slave-holding States, and that [of] a majority of their citizens, our grievances assume far greater magnitude.

The States of Maine, Vermont, New Hampshire, Connecticut, Rhode Island, Massachusetts, New York, Pennsylvania, Ohio, Wisconsin, Michigan and Iowa, by solemn legislative enactments, have deliberately, directly or indirectly violated the 3rd clause of the 2nd section of the 4th article of the federal constitution, and laws passed in pursuance thereof; thereby annulling a material provision of the compact, designed by its framers to perpetuate amity between the members of the confederacy and to secure the rights of the slave-holdings States in their domestic institutions–a provision founded in justice and wisdom, and without the enforcement of which the compact fails to accomplish the object of its creation. Some of those States have imposed high fines and degrading penalties upon any of their citizens or officers who may carry out in good faith that provision of the compact, or the federal laws enacted in accordance therewith.

In all the non-slave-holding States, in violation of that good faith and comity which should exist between entirely distinct nations, the people have formed themselves into a great sectional party, now strong enough in numbers to control the affairs of each of those States, based upon the unnatural feeling of hostility to these Southern States and their beneficent and patriarchal system of African slavery, proclaiming the debasing doctrine of the equality of all men, irrespective of race or color–a doctrine at war with nature, in opposition to the experience of mankind, and in violation of the plainest revelations of the Divine Law. They demand the abolition of negro slavery throughout the confederacy, the recognition of political equality between the white and the negro races, and avow their determination to press on their crusade against us, so long as a negro slave remains in these States.

For years past this abolition organization has been actively sowing the seeds of discord through the Union, and has rendered the federal congress the arena for spreading firebrands and hatred between the slave-holding and non-slave-holding States.

By consolidating their strength, they have placed the slave-holding States in a hopeless minority in the federal congress, and rendered representation of no avail in protecting Southern rights against their exactions and encroachments.

They have proclaimed, and at the ballot box sustained, the revolutionary doctrine that there is a “higher law” than the constitution and laws of our Federal Union, and virtually that they will disregard their oaths and trample upon our rights.

They have for years past encouraged and sustained lawless organizations to steal our slaves and prevent their recapture, and have repeatedly murdered Southern citizens while lawfully seeking their rendition.

They have sent hired emissaries among us to burn our towns and distribute arms and poison to our slaves for the same purpose.

They have impoverished the slave-holding States by unequal and partial legislation, thereby enriching themselves by draining our substance.

They have refused to vote appropriations for protecting Texas against ruthless savages, for the sole reason that she is a slave-holding State.

And, finally, by the combined sectional vote of the seventeen non-slave-holding States, they have elected as president and vice-president of the whole confederacy two men whose chief claims to such high positions are their approval of these long continued wrongs, and their pledges to continue them to the final consummation of these schemes for the ruin of the slave-holding States.

That in this free government all white men are and of right ought to be entitled to equal civil and political rights; that the servitude of the African race, as existing in these States, is mutually beneficial to both bond and free, and is abundantly authorized and justified by the experience of mankind, and the revealed will of the Almighty Creator, as recognized by all Christian nations; while the destruction of the existing relations between the two races, as advocated by our sectional enemies, would bring inevitable calamities upon both and desolation upon the fifteen slave-holding States.

By the secession of six of the slave-holding States, and the certainty that others will speedily do likewise, Texas has no alternative but to remain in an isolated connection with the North, or unite her destinies with the South.

I count 21 mentions of ‘slave’ in that Declaration of Causes.

The idea that slavery wasn’t an underlying cause of the civil war is absurd.

I have no doubt that Speaker Straus will be unmercifully attacked for his stand for truth. A brief glimpse of his Facebook page shows what he is in for:

Speaker Straus, by what authority do you have to declare the information on the plaque is not accurate? When you read the documents about what started the Civil War, it clearly identifies the grievances the states had against the US federal government. Honey, and slavery was NOT one of the top items. Yes, slavery was painful. Key word: WAS! Do you not get it?

I always assumed u were a democrat!

Once again you show that you stand against the people of Texas and that you are a RINO. You should be ashamed of yourself.

I could be wrong but I asked myself a question, how was it that many God-fearing people had slaves? Was slavery wrong? Was it a misnomer? Were they slaves in their eyes or were they saving the acquired from being killed by other tribes or from hunger or a worse servitude?

This democrat criminal straus is lousy. Jail him. All confederate men’s statues stay. These are hero’s. You are the traitor to America.

Those are the nice ones.

We’ve been needing a Republican leader for a long time in Texas. Someone who isn’t afraid of going against the grain. Someone who doesn’t stick his finger in the air to see which way the wind is blowing in Republican primary circles before he makes a statement.

We’ve found him, as I’ve said for many years now. The question is, will we listen to him?