You are here: Home / Politics / National / For Congress, There’s a Flood of Work to Do 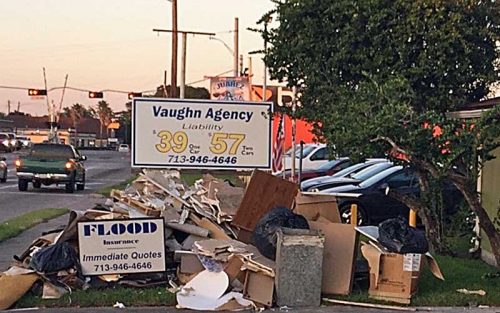 In the wake of Hurricane Harvey’s devastation of the Texas coast, heartbreaking images flood our television screens of families struggling to stay safe amid rising waters. It’s too early to know just how much damage Texas will suffer, but it’s already safe to say that figure will be in the billions. Congress is already discussing emergency funding, and charities across the country are soliciting funds for affected victims.

But when all the funding is appropriated, donations are in and the rest of America resumes their regularly scheduled news programming, the aftermath will continue to linger for millions of Texans. Unfortunately, for many whose homes are lost, their first line of defense—coverage sold through the National Flood Insurance Program—sits in limbo. Legislation to reform and reauthorize the federal program has passed neither the House nor the Senate, despite a Sept. 30 deadline. Even more regrettably for those in harm’s way, the fate of much-needed reform is unclear, making it even more likely that a costly disaster like Harvey could cause unnecessary damage in the future.

The House of Representatives is further along in the process than their Senate colleagues. The House Financial Services Committee in June approved legislation that makes meaningful reforms to the program, including investments in mitigation, better disclosure of flood risks, means-tested assistance for low-income homeowners, requiring the program to buy reinsurance and, most importantly, clarifying that policies purchased from the growing market of private flood insurance providers meet federal lending requirements. These important changes would not just protect communities by lowering their exposure, they would also send signals about the true risk homeowners are taking on, allowing those in flood plains to make more informed decisions about where to live.

Not only is the Senate pretty far behind in this process but the base bill under consideration by the Senate Banking Committee would reauthorize the NFIP for six years without making meaningful changes to a program that already was nearly $25 billion in debt to U.S. taxpayers, even before a single Harvey claim comes in.

Created in 1968, the NFIP is the primary provider of flood insurance United States, although an emerging market of private providers sold more than $400 million of coverage in 2016. There are a number of factors that constrain the private market from growing even more quickly, most notably that roughly one in five NFIP policies are explicitly subsidized and don’t pay rates that match the risk they face. According to a December 2014 report by the Government Accountability Office, thanks to subsidized policies, the program collected $11 to $17 billion less in premiums than was actuarially prudent over the dozen years from 2002 to 2013.

But there are other more subtle barriers that the House bill attempted to address and which the Senate bill, sadly, does not. Most importantly, the Senate bill fails to make it clear that private flood insurance is an acceptable alternative to the NFIP for the purposes of lending and continuous coverage requirements. Without making this change, the nascent private flood insurance industry will be stymied, while all risky flood properties stay in the government program.

Despite claims to the contrary, this one change would do more to put the program on stable footing and protect homeowners than any other. As Florida’s recent transition from state-provided windstorm insurance to private market competition shows, insurance companies are very interested in taking on high-risk properties, which actually provide them the highest returns on investment.

Failing to make these changes only locks those living in flood plains into the NFIP rather than making them free to choose the coverage that makes the most sense for their needs and their budgets. A recent survey by the actuarial firm Milliman found that, for those in the highest-risk zones, 62 percent of policyholders in Florida, 85 percent in Louisiana and 88 percent in Texas could find more affordable coverage in the private market than with the NFIP.

For all its flaws, the Senate bill does include a few good provisions. For example, it requires the Federal Emergency Management Agency to use the best available technology to mapping floodplains, and requires property-level data whenever possible. The bill also bulks up mitigation programs a small amount, and appropriates funds for pre-disaster mitigation, always the preferred path to make communities safer.

Unfortunately, these small measures simply aren’t enough to serve as a starting point for negotiations. Those living in floodplains, and those who subsidize them, deserve more than small tweaks in exchange for a longer-than-usual extension. The number of properties reporting repetitive losses is on the rise, and flood disasters are increasingly expensive. In 2016 alone, the federal government declared 36 disasters due to hurricanes or flooding, with four disasters topping $1 billion in damage.

It’s simply not good enough for Americans whose lives are at risk to have to live under the threat of short term program extensions due to congressional inaction. But more importantly, it’s completely unacceptable for the federal government to maintain a monopoly on their insurance options, while sending the message that it’s safer to live and work in these areas than it actually is. While it may be a difficult conversation, the results of this skewed incentive structure are obvious in Texas today. Congress would be wise to pass major reform before the next disaster strikes.