If so, then you probably should make an effort to attend tomorrow evening’s Candidate Petition Signing Party: 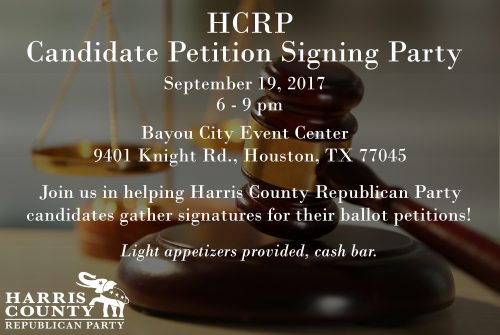 The ‘party’ is not restricted to judicial candidates but that is the primary purpose.

And I would encourage you to attend. Because in the big picture, you can save the Republican candidates as a whole tens of thousands of dollars.

But I would also encourage you to not sign any petition presented to you be an incumbent judge. Why?

Don’t sign a single petition for an incumbent. Make them get up off their asses, travel around the county and attend the dozens of meetings held each month by Republican grassroots activists.

Don’t believe me that incumbents are lazy? Check out this screed from Probate Court 3 Judge Rory Olsen:

Over the more than three decades that I have been associated with the Harris County Republican Party, I have attended my fair share of judicial petition signing parties – as an activist and as a judicial candidate. The last few events that I have attended have been models of efficiency. Each event has been held in the ballroom of a centrally located hotel. There was adequate parking. Food, beverages and a place to sit and socialize were all provided. Candidates were able to get most – if not all – of the signatures needed for their nominating petition. The signatories had a good time.

Obviously this is a system that has worked well over the years. There was great coordination between the party and the judicial candidates. If not perfect, the system was close to it.

Unfortunately the current chair of the Harris County Republican Party, Paul Simpson, without discussing the matter with the judges beforehand, announced on June 20th that he was going to abandon the tried and true system of the past in favor of holding a signing party at the current party headquarters.

So instead of holding our next signing party at a well-known, easy to find venue like the J.W. Marriott, the event will be held at the county party headquarters, which is located in a hard to find, dimly lit, industrial area to the north and west of downtown Houston.

If a prospective signer were to succeed in finding the place, he or she might have to struggle to find a parking place. Once inside the building, the prospective signer would notice the cramped space and the décor that looks like it was borrowed from the set of the modern version of “Battlestar Galactica.”

What will happen if the bad location lowers the turnout? No worry there! There will be more signing parties at the even more obscure satellite offices of the county party.

Bottom line: Instead of holding one, nice successful event, the judicial candidates will be forced to attend multiple events scattered around the county.

Obviously Judge Olsen got his way and Chairman Simpson moved the party to a more ‘acceptable’ location. After all, only the mind-numbed masses would dare go to a meeting on the set of Battlestar Galactica.

As someone who has spent many hours attending multiple events around the county over the years, I can assure you that traveling around our very large county is not fun. And I can also assure you that I will never vote for someone that isn’t willing to do the same thing. Dude doesn’t want to put forth an effort to garner votes yet expects people to come out to a “nice, successful event” to support him. Jackass. As our President would say, what a loser!

It is past time to stop automatically supporting incumbents in the Republican Primary. The least you should do is ask a few questions.

I understand that it is very difficult when it comes to judges. I’ll be the first to tell you that I’m not qualified to pick them. Lord knows I regret many of my past votes for candidates on the ballot. But lord help us all if you rely upon the attorneys that make up the Bar in Harris County to pick judges. I’ve never met a more incapable group of people in my life to make those decisions.

Here is my advice. Find a challenger to every single incumbent. Sign their petition so that they can at least be on the ballot. Then flip a coin when it comes time to vote. I promise, we’ll all be better off.