This is one strange election. Donald Trump would not be the Republican nominee without the mainstream media’s help. Lest you forget:

Donald Trump has gotten the equivalent of nearly $3 billion in free advertising since last May, according to the latest statistics from the firm mediaQuant, blowing away rivals in both parties.

The numbers are likely to add fuel to critics’ charges that Trump has gotten too much unpaid air time. Cruz in March said the media was “engaged in a love fest” with Trump — before TV host Anderson Cooper said Cruz had declined offers to be on his CNN program.

Speaking of Texas Sen. Ted Cruz, remember what he said?

Cruz Goes On a Tear Against the Press: Trump Is ‘The Media’s Chosen Republican’

Ted Cruz spoke to supporters from Indiana tonight and went on a tear against the media for propping up Donald Trumpfor months.

Minutes before any states were called tonight, He fired up the crowd by declaring that the media is “so eager to have Donald Trump as the Republican nominee,” and so they’re going to quickly declare the GOP race is over.

And the reason for this, Cruz continued, is that network executives are Democrats who know that Hillary Clinton crushes Trump in the general election.

So obviously the media is now against The Donald:

Donald Trump is accusing a “sick media” of trying to take down his presidential campaign in cahoots with rival Hillary Clinton’s campaign.

Speaking at a rally Friday in Greensboro, North Carolina, Trump targeted Carlos Slim, the Mexican billionaire who owns a share of The New York Times.

Trump declared that “we can’t let” Slim influence the election.

Trump has threatened to sue the Times for a story that featured two women who accused Trump of sexual misconduct.

Trump is accusing the media of fabricating stories about a slew of women who have made similar accusations in recent days. Trump says the stories are lies.

He said, “our media is indeed sick and it’s making our country sick. And we’re going to stop it.”

Hey, I don’t know about the media making our country sick but they sure ’nuff made the Republican Party sick. And it might never recover.

I think this says it all about the state of the Trump campaign: 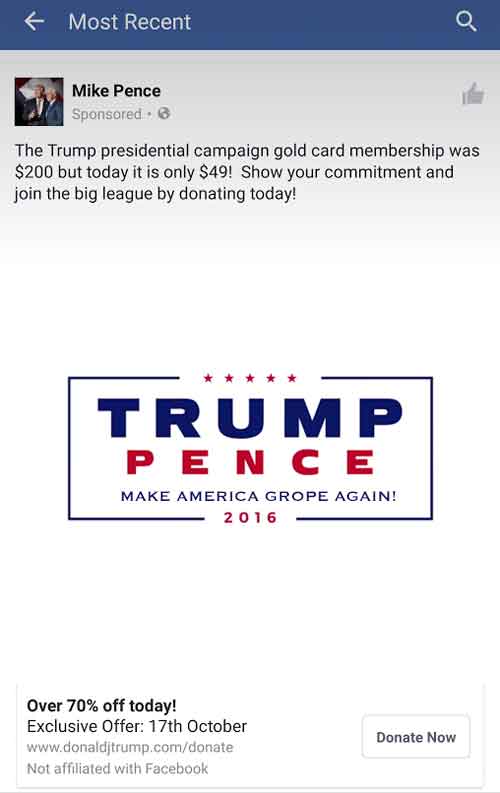