It is time for online voter registration in Texas 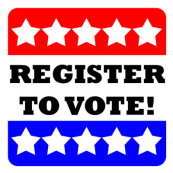 Perhaps I should start a series on things Republicans are afraid of and shouldn’t be. If I did, it would be appropriate to start with voter registration, specifically online voter registration.I briefly mentioned it in this post about the most recent meeting of the Harris County Republican Party Executive Committee but didn’t follow up on it.

The resolution stating opposition to online voter registration passed overwhelmingly. I was very disappointed to hear from the chair of the Ballot Security committee, Alan Vera, that Harris County Tax Assessor Collector Mike Sullivan was not only in favor of the resolution but helped draft it. I’m guessing that comes as a surprise to Sullivan’s new friends on the leftas well. Oh well.

Fortunately, there are a few reasonable Republicans left in the Texas legislature. A few of them have signed on to push legislation to make online voter registration a reality with a new group called, appropriately,Texans For Online Voter Registration.

Kudos to these Republicans for not being afraid of making it easier for Texans to register to vote. They are going to be attacked viciously for their stance.

But it isn’t only about making it easier to register. It is also about conservative yardsticks such as lower cost, higher accuracy, and higher efficiency. And yes, even more security. After all, which one of these methods of registering has the lowest chance of someone stealing your identity? You, entering your own data over a secure network connection OR you filling out a card with your information on it and giving it to someone else, who, after copying your data for their own use, must then turn it over to the government, and then a clerk has your information and has to input it into a computer. I think I’ll take option one, thank you very much.

I have my doubts about this issue passing the Texas Senate, a place where Republicans seem to be afraid of anything and everything except giving crazy folks the opportunity to carry pistolas on their hips.

I don’t understand why, in a state where people are clearly more conservative than not, Republicans are afraid of expanding their voter base. The more people that we register, the more opportunity we have to spread the conservative message.

Instead Of Blessing America, God Unleashed A Plague Of Radical-Left Pestilence Upon Us