Well, well, well, the wheels of justice turn slowly but it looks like justice is finally, I say finally, being meted out to Rep. Ron Reynolds, Democrat from Missouri City.

The Missouri City Democrat had asked the court to overturn a 2015 misdemeanor conviction in Montgomery County for illegally soliciting clients for his personal injury practice. Reynolds still has 15 days to file a motion for a rehearing, according to a staffer at the court, but it is likely that Reynolds will soon serve his year-long jail sentence.

Joel Daniels, the main prosecutor in Reynolds’ trial and chief of the white collar division in the Montgomery County District Attorney’s Office, said the court’s next step would be to issue a mandate to the trial court to carry out the sentence.

“That will mean that Mr. Reynolds’ case will be put back on the docket, and he’ll be brought into court” and taken to jail, Daniels said.

(click here to read the entire article by Jolie McCullough on TexasTribune.com)

It’s about damn time. This has been going on since 2014, as we noted here.

But hey, I suppose it is a sad day for one local “campaign operative” that gets paid by both Democrats and Republicans. I found this picture amusing: 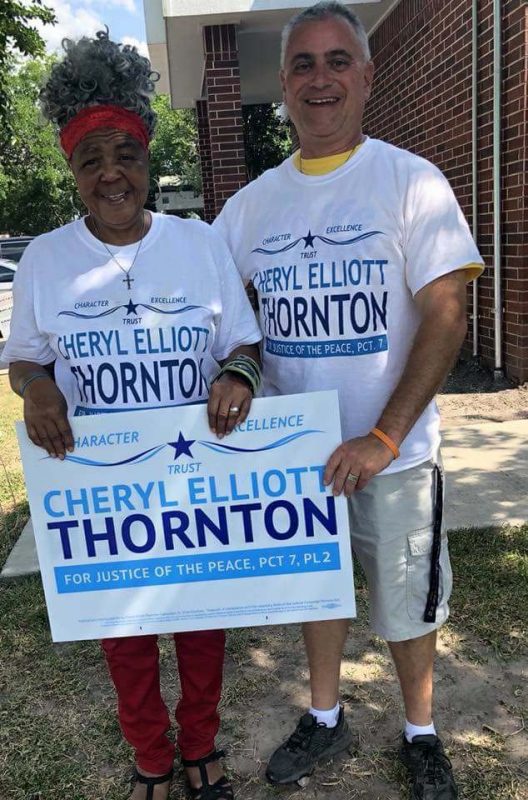 That would be gadfly Burt Levine campaigning for Democratic candidate Cheryl Elliot Thornton while still wearing his Republican for Justice of the Peace Mike Wolfe shirt. Fortunately, Wolfe lost. As did Ms. Thornton.

This wasn’t so amusing from the recent March 2018 primary:

Not amusing when I think of all of the Harris County Republicans that are paying Burt. See above for effectiveness.

I sure hope that Burt visits his good friend in the hoosegow.