Unfortunately, I think that is going to be the norm for the mid-year elections. While national poll after national poll predicts a wipeout of the incumbent Democrats, meetings like this remind me that polls are polls and elections are elections. Sure, Republicans will make gains – history shows us that. But will Republicans make historic gains? I’m not so sure about that.  There is still plenty of time for the R’s to blow it and for the populace to remember that, while the other guys suck, our guy is a good one. Think R’s can’t blow it? Take a look at Cory Crow’s Momentum Killer:

You could say something such as “not smart” or “idiot” or any number of other descriptors for this and be within your rights. “Hypocrite” is another one that comes to mind, Rep. Driver being one who rails against Government waste of taxpayer dollars while contributing to it at the same time.

That story is unbelievable. The guy admits to being reimbursed personally for money his campaign spent. Basically, it goes like this: I contribute $100 to your campaign. You spend the $100 traveling to meet voters. You turn your receipts in to the state and the state gives you $100. You now have $100 in your pocket that you didn’t have before I gave it to you. Do you see the problem here? Forget ethics complaints, think criminal charges. Think IRS and tax evasion. Do you think that this is a one-off occurrence? Do you think that maybe some smart Dem is going to figure out that they can use this against conservatives? Of course you do.

Which is why people have to stop counting their chickens before they hatch and get to work overcoming both internal problems and the path of least resistance aka incumbency. All of these “patriots” in and around Houston and they can’t make time to head over to a congressional town hall? Are you kidding me? All the while, they are going about raising money to take a bus up to D.C. on the 28th to “protest” and “restore honor” by listening to a talk show host and a woman that didn’t bother to finish up a single term in office? What the hell are you going to protest? Your lack of attention span? Good grief.

Back to the town hall. Rep. Green held to his usual format, spending the first 15-20 minutes telling the attendees what he has done since the last time they met and then opening the floor up to questions. BTW, there was no requirement to present a photo id this time around because it wasn’t necessary – at the “height” of the meeting, I counted 34 attendees that were not staff. So much for all that pent-up anger and passion we hear about.

He touted the passage of health care non-reform and the financial regulation bill that was recently passed. About the health care bill, he repeated his assertion from last summer that he had to vote for it because his district has the highest percentage of uninsured non-elderly residents in the country. I don’t know if that is true or not but it is backed up by this report. Here is the relevant table: 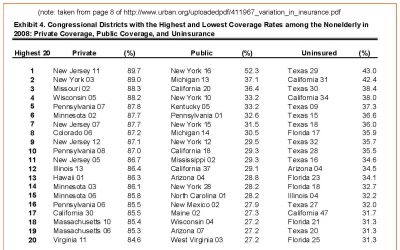 Audience questions were mostly about the three big issues: immigration, health care, and cap-n-tax. For the first time that I can recall, Gene actually lied to me. He stated, during an answer to a question about health care, that many large companies in his district came to him and asked him to vote for the health care bill. I then asked him to name one and at first he stumbled around, citing meetings with union groups, and then finally declared that he wouldn’t name them because it was a hot button issue. Sad that this once decent man has been reduced to this.

On immigration, he touted that every year he’s been in Congress, they’ve approved more money for border security. He then told a story of how he used to be able to hunt doves on the border but now he can’t because a Border Patrol agent will spot him and ask him what he is doing. My thought? Tell them to look towards the border and stop the people crossing in waves. When asked about the illegal that killed the 14 year old girl recently, he noted that he tells illegals that Texas has the death penalty and isn’t afraid to use it. Seriously, he said that.

On Cap-n-Tax, he relayed how he makes both Gov. Perry and President Obama mad. Perry because he thinks the Texas education system is a failure and Obama because of the offshore drilling moratorium. So I went to his website to see what he did to make the big O mad:

“I’m proud to represent a blue collar district that is deeply connected to the oil and gas industry,” said Rep. Green. “This moratorium is putting the livelihood at risk of not only the people of our area, but of thousands more across the Gulf.”

“Drilling and exploratory wells are distinct from one another and present different regulations and levels of risk,” Rep. Green went on to say. “It is possible to continue the investigation into what went wrong on the Deepwater Horizon and apply new regulations, both while continuing production and preventing further job loss and economic damage.”

Oh, boy, those are indeed some fighting words! Not. I’ll repeat myself: good grief. Hey, Gene: what are you actually DOING to help? Nada.

Back to health care, someone asked why he would support socialized medicine. Rep. Green bristled at that, turning red in the face as he does, and stated: this is NOT socialized medicine because it doesn’t provide free insurance. Then he proceeded to tell us how it did provide insurance for those folks that couldn’t afford it. Good grief.

But wait, there’s more fun! He expounded even further on why he had to vote for the healthcare bill, stating that more than 45 million Americans did not have insurance! And…wait for it…as many as 9 million were illegal! And further, the reason we have to force people to buy insurance is that the whole concept of insurance was to spread the risk, therefore, we need everyone to pay. Except those that don’t. Good grief.

And then, as if on cue, someone asked him, doesn’t forcing us to buy insurance take away our rights to freedom and liberty. And I’ll be danged if he didn’t say, “You’re right. It does take away a freedom. But lots of freedoms have been taken away.” Good grief.

And to think that people would rather spend their money and time taking a bus to D.C. than working with candidates to defeat guys like this who are destroying our country.

Hell, after this meeting, I’ve decided to look for one of those bus tickets. Partying in D.C. is surely more fun than the reality of what is happening in the real world. Except that I’d take a pass on Glenn Beck, Sarah Palin, and the pretense that I was there for something other than partying and head over to Blues Alley. Now that would be fun.