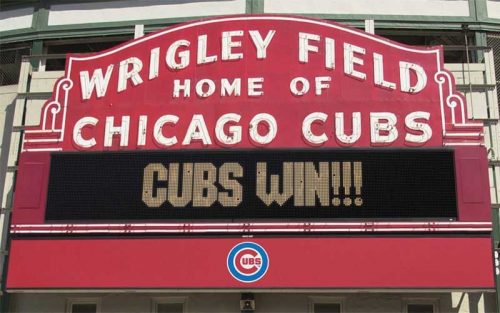 Last night, as I started to turn the lights off around12:15 a.m., I got an email news alert from the Wall Street Journal announcing the Cubs had won the World Series in a “thriller for the ages.” As the game I just finished watching was still sinking in, I thought that was a great way to describe what I just witnessed.

Frankly, in all my years of following this sport, I can’t remember another game that was as intensely and competitively played, or as emotionally exhausting, as last night’s finale. The game was not the best played that I’ve ever seen, but it was one of, if not the most, dramatically played, with virtually every element that makes a game exciting to watch. It truly goes down in baseball history as a “great game”—a testament to two fine organizations, two great managers, and two squads of fine young men. Bravo!!! (And, what a welcome diversion from all the noise that we’ve endured during the election campaign this fall!)

I am sure that a lot of people will write about this season, this World Series, and last night’s finale for years to come—my purpose for writing this post is just to share the moment and some memories that have flooded over me the last few weeks and touched me last night.

It started as I watched the field celebration at Wrigley Field the night the Cubs beat the Dodgers to win the NL pennant. As I watched the young men sharing such joy, I noticed Billy Williams on the field with them and realized that he is one of the last players remaining from that great team I watched when I was learning to love this game.

A lot has been said about the Cub drought—108 years since a World Series win, 71 years since an NL pennant—but for someone my age so much of those numbers are just abstract “history.” What we recall, and what has driven our embrace of this seemingly hapless team for so many years (even the embrace of this old White Sox fan), was the memory of a special squad of men who graced Wrigley Field for several summers in the late ‘60s and early ‘70s—arguably the finest team of players to never reach the playoffs.

Fifty years ago, in the spring of 1966, Chicago fans were excited as both teams seemed to be entering a new chapter with new managers. While the Sox were replacing the great Al Lopez with Eddie Stanky, the Cubs were making an even bolder move by hiring Stanky’s mentor, Leo Durocher. Neither move made much difference in 1966, but the next season both teams were in the hunt. For the Sox, it would be the last of 17 straight winning seasons, in which they held 1stplace until the middle of September and would be one of four teams to be tied for the AL lead going into the last week of the season.

But it was the Cubs that began to steal all the attention of Chicagoans, as team of hapless underachievers began to compete. In fact, for a time in July, 1967, both Chicago teams were in 1stplace—an incredible development.

For me, that was an important time, because my family moved that fall from the Chicago suburbs to a small town just north of Peoria, Illinois. As a Sox fan, it was like a Kansan landing in Oz—no one was a Sox fan, and no one even recognized the AL as a “major” league—everyone was either a Cub or Cardinal fan, and they were competing against each other for the pennant for the first time since the 1940s. So, while the Sox were trying to hold onto the AL lead in one of the tightest races in baseball history, everyone around me was following the NL race.

It was during that summer and fall that I had to finally pay attention to my brother’s favorite team—the Cubs. And, frankly, I came to love that squad as much as I did my Sox. Unfortunately, those Cubs were doomed to have to compete with three of the best teams of that era from 1967-1972, finishing in 2ndor 3rdplace behind the 1967-68 Cardinals, the Amazing Mets of 1969, and Danny Murtaugh’s excellent Pirate teams of 1970-72. But, the quality of that Cub squad’s play, coupled with the decency and joy they brought to the game (and, in turn, to their fans), made them larger than life to an entire generation of kids like me, who have carried those memories down through the years to last night.

First, there was the greatest infield of the era: Hall of Famers Ernie Banks at first, and Ron Santo at third; joined by All-Stars Don Kessinger at short, and Glenn Beckert at second. Joining them were Hall of Famers Billy Williams in left and Ferguson Jenkins on the mound, along with All-Stars Randy Hundley behind the plate, and Holtzman and Hands in the rotation. The shear collection of talent was fun to watch.

But it wasn’t just the talent that drew the fans to this Northside team, it was their infectious love of the game, and their apparent love and respect of each other and the fans, which made them so memorable. Ernie Banks was arguably the finest human being to ever grace an American sport; Ron Santo was the cheerful ambassador to the fans; and Billy Williams was the stoic sportsman and gentleman, whose consistency was incredible. They formed a core of men who just seemed to love what they were doing and loved the City and the fans. Add to those guys the wonderful play-by-play of Jack Brickhouse, and then Harry Carey, and the Cubs seemed like they were part of your family. And you just wanted those guys to win someday.

It was that emotional memory that began to wash over me as I watched these new Cubs around Billy Williams that night at Wrigley—and it’s been in the back of mind since. What makes what happened this fall so much more satisfying is that today’s squad resembles both the talent and the character of that team of my youth. That helped to make last night very special.

So, as I closed that email last night, I thought to myself that Billy Williams must be very proud of, and happy for, these young men,; and that somewhere last night,

Ron Santo was jumping into the air and clicking his heels,

There was Ernie, flashing that memorable smile that could light-up the darkest room, and saying, “Wow, that was great; so, let’s play two!”

Ed Hubbard has been a contributor to Big Jolly Politics since 2010. He is an attorney in Harris County, who practices complex litigation and appellate law with the firm of Kilpatrick Townsend & Stockton LLP. Ed has been active in civic and political affairs in the Houston area since he came here after graduating from law school at SMU in 1983. He has served as a member and/or officer of several local organizations, including the boards of St. Paul’s Methodist Church and its Foundation; St. Thomas the Apostle Episcopal School in Nassau Bay; the Institute of Hispanic Culture of Houston; the Clear Lake Area Republicans; the Greater Houston Pachyderm Club; Raging Elephants.Org; United Republicans of Harris County, and the Executive Committee of the “C” Club of Houston. Ed was the Republican nominee for a seat on the First Court of Appeals in Houston in 2008, a candidate for the Chair of the Harris County Republican Party in 2010, and Legal Counsel for the Harris County Republican Party. Currently, Ed is a member of the “C” Club of Houston and the Immediate Past President of the Greater Houston Pachyderm Club, and is working with contributors to BJP and others on the development of a new civic project known as “Renewing the American Neighborhood.”

So what’s happening with political party finances in Harris County?

I guess it depends upon whose ballot box is gored