You are here: Home / Blog / ChooChoo! Ridin' the METRO Rail

The return trip was much the same. I purchased another ticket for $1.25 and saw one person swipe their “Q Card”. Maybe the rest of those boarding had already paid, I don’t know. It did make me wonder how many paid riders vs freeloaders there were but I doubt you could track that. Maybe METRO has door scanners or something – I didn’t notice any but they could very well be there.

Overall, it was a pleasant experience. The train was clean enough, probably as clean as it could be after running for 6 to 8 hours. I didn’t see any METRO employees, unlike Monday when they were spending more taxpayer money handing out Valentine’s Day cards to riders, so I have no input on their friendliness, at least on the train. The trains were on time, which was my biggest worry. All in all, I spent a total of $5.50, saving five or six bucks versus my normal routine of using the valet service and since I have more time than money, that is a good thing.

The Park and Ride Lot

I mentioned that I was at the Fannin South location, which is one of METRO’s Park and Ride lots. The lot is located just South of Loop 610, behind the Sam’s Club – as you can see in the photo, Reliant Stadium looms large in the distance. It is a huge lot – I found a space designated as # 1377, so I’m guessing it has a capacity of 1,377 vehicles. I’m smart that way.

I’d estimate that there were 350-400 cars in the lot and from the looks of it, METRO maintains about half of the lot. My spot 575 was nicely painted but the higher numbered slots were not clearly marked, as you can see in the photo for # 1377. Also, the gates on the east exits (Knight Rd.) were locked, forcing people to enter from Bellfort. There was some trash around but not too bad – why do some people think that they should be able to throw their trash on the ground whenever and wherever they please? It was the middle of the day, so I can’t comment on security lighting but did see several “Emergency” call stations. The picture below from Google shows the parking lot about half full.

This one is from the Park and Ride lot – as you can see, the facility is set well back from the road, so I decided to drive around and find a better spot to take a picture. That is when the…I’ll let you decide what started. Some of you will no doubt agree with the actions of a METRO employee, some will not. I don’t but that is just me. Here is a Google image to show you the layout of the facility (not that a terrorist would have access to Google, ya know):

I circled the place and there was only one place that I could safely pull off the road and take my picture. It looked like maybe it was a service entrance that hadn’t been used in a while. Whatever it is, it is located on Knight Rd. on the east side of the facility, you can see it in the picture above and here is an enlarged version:

I stopped, got out of the car, took two pictures, got back in the car and drove away. I was out of the car for maybe 45 seconds, max. I made it as far as the intersection of Knight Rd. and Holmes before being…stopped by a METRO employee in a huge truck. I was in my Buick Regal, his truck must have been a Ford F350 dually or something like that. I was about to pull out onto Holmes and turn left when this truck whips around me, pulls in front of me, half on Holmes, half on Knight and comes within inches of my front bumper and stops. The driver jumped out and came around the back of his truck, approaching me from behind. I was startled at first, then recognized that it was a METRO truck and the driver looked to be wearing a METRO shirt, I’m not certain about that. The guy comes running up and I roll down my window and ask, politely, Can I help you? He yells, What are you doing here? What are you doing?

At this point I was calmed down because I could see that he didn’t have a weapon and he was a METRO employee, so I simply said “it is none of your business”. Politely. I didn’t yell, scream, nothing, simply stated that it was none of his business. At that point he went berserk, saying he would “show me” and that he “had me now”. I decided it was best for me to leave, so I turned the only way I could, right on Holmes, over the curb. The guy jumped in his truck and started following me. I proceeded down Holmes and turned north on Fannin to get back to Loop 610, going around the service center and past the Park and Ride. He continued to follow me even as I got on the freeway and headed to Pasadena for another doctor’s visit. At some point past the Hwy 288 interchange he must have turned off because I never saw him again.

I decided to file a complaint with METRO and called the complaint line listed on their website, 713-658-0180. I spoke with Jonathon and he was very pleasant, deciding that I needed to talk to METRO police. He transferred me and I was quite surprised to find that the dispatcher was already aware of this – they were looking for me! Seems the employee reported that I was a suspicious person and possible terrorist threat. Wow. All for taking a picture from the street of a public building. The dispatcher asked for my number and a few minutes later an Officer Goode called. I told him what had happened and he asked why I was taking pictures. I tried to explain about the special blogger luncheon but the minute I said I was a blogger, he dismissed me with “you’re a blogger, you should know about the high security situation we have in this country. What would you do if you saw someone looking into your backyard?”. Rather than argue with Officer Goode, I asked him for the name of the employee and told him thank you.

I then called the complaint line again, spoke to Jonathon again, this time saying that I wanted to file a complaint against METRO Rail employee XY. He remembered my earlier call and took my complaint, giving me a control number, telling me that I could call back later and use that number to inquire about the status of the complaint. I don’t hold out much hope that this employee will receive proper training though – most likely they will pin a medal on his chest rewarding him for his diligence. Why do I think that?

Well, first from the officer’s attitude. Second, Kevin Whited from blogHOUSTON pointed me to a post he did a couple of years ago about METRO having a counter-terrorism unit – wow. Third, because while I was on hold trying to file a complaint, the recorded message told me to be on the lookout for terrorists. Interestingly, no one at METRO cared that I was walking around the Park and Ride taking pictures – wouldn’t you think that would be a better place to worry about terrorists and crime?

The bottom line is that around noon on a weekday, I took a picture of the outside of a publicly owned repair facility and was harassed by a METRO employee that obviously needs better training. If he had any concern at all that I was a terrorist, he should have pulled behind me, taken down my license number, and radioed or called the METRO PD. Instead, he darn near caused me to have a stroke. All because I took a picture from the outside, something that would be far easier for a terrorist to see by simply Googling it. Here are the pictures that created the problem:

On the other hand, if I were part of METRO’s PR blogger brigade, I could have been treated to lunch on the taxpayer’s dime and taken as many pictures as I wanted to of the INSIDE of the facility. And then published them on the web for all to see, as blogger Neil Aquino at Texas Liberal did.

A terrorist can’t see that via Google, now can he? Or she?

Or how about this one from Brains and Eggs? 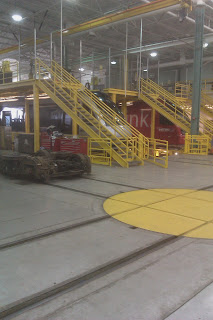 I’m guessing that isn’t visible via Google either. What do you think?

No, I don’t want an apology from METRO. Hey, I’m not Quanell X. All I want is for METRO to train their employees not to harass innocent citizens. Is that too much to ask? I don’t think so because this is not a rare occurrence –check this website out for much more.