You are here: Home / General / A Tender Kiss 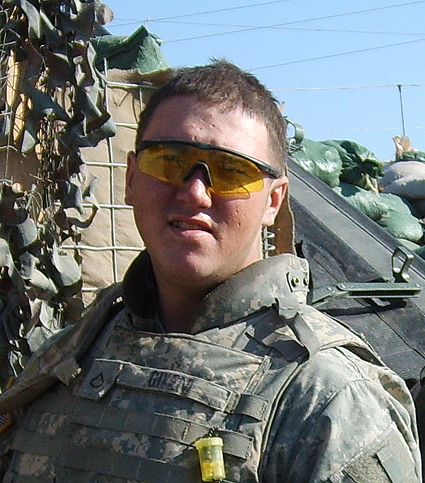 Pfc. Nathaniel A. Given was killed in action on December 27, 2006, by an improvised explosive device in Jumbalatiyah, Iraq while conducting dismounted patrol. From all accounts, Nathan was first and foremost a person that cared about others. His father related to me how Nathan would accompany him to visit the kids at Shriners Hospital in Galveston.

I have been a Shriner at El Mina Shrine for the past 7 years. Nathan has always been by my side along with his little brother Emery doing everything they can to help me with the children at El Mina Shrine Burns Hospital, they never had to they just enjoyed working with the kids as I do.

In an interview with the Galveston Daily News , Nathan’s father recalled a conversation with his son about their shared bulk.

Nathan’s 6-foot, 4-inch frame proved useful for the Army’s needs, which were not altogether to his own liking.
“He would complain to me: ‘Dad, how come you made me so big? They make me carry the big weapons,’” Scott Given said.
That big frame also left a mark at the family home. During a visit home before heading to Iraq, Nathan attempted to hop the fence in the backyard. Instead, he bent the frame.

Nathan’s father, Scott, also shared with me an email from Nathan’s First Sergeant, Aldo E. Galeana that talked about Nathan’s growth as a soldier. It also speaks of the bond that soldiers have for each other and a remarkable display of humanity on the battlefield.

As the senior sergeant of the company it is my job to make sure the Soldiers are trained and ready for combat. When your son arrived in the unit, I was the one that went to pick him up from the Battalion Headquarters. All the new Soldiers arrived there. When I arrived there, I started yelling like all first sergeants do. He looked a little nervous and a little scared. After about 5 months or so he started to do pretty good, nothing special or extraordinary. You know when we are in garrison the soldiers that talk a lot of trash are usually the ones that are timid in combat. Well sir, your son was not timid in combat whatsoever. When we arrived in Kuwait for a little bit of training and acclimatization, your son’s platoon sergeant used to come up to me and tell me that he was starting to see a lot of changes in your son, good changes. He used to clean his weapon without any one telling him to do it, squaring away his gear, squaring himself away, by studying his equipment capabilities. When we arrived in Iraq, you could tell your son was coming on his own. What I mean by that is that he was doing excellent. Every time his platoon got hit by an IED or enemy fire, he pulled security and scanned his sectors of fire. This might not seem like very important to other people, but for us in the Infantry it is. He scanned his sector and kept at the ready. His platoon sergeant was very impressed by him, he was happy he had a Soldier that he did not had to worry about. Your son always had a good attitude. He was always happy, and was well liked in his platoon. He had the respect of his peers, and his leaders had confidence in him. I do not know how much he told you about the situation over here, but it is pretty bad. We are in a very bad sector. Your son handled himself pretty good in combat. He was brave and strong. He received a coin from a 2 star general, which are very rare. His platoon nominated him to get it. He was ahead of his peers, and I was about to promote him to E-4.

When your son passed away, the platoon was conducting a dismounted patrol. They got hit with a dismounted IED that was pretty big. Your son and sergeant Messer were knocked out immediately. He did not suffer, and he did not pass away alone and in pain. I was the one that went to pick them up, and brought them to the medics here in our patrol base. I was in there with the medics when your son passed away. Mr. Given I am of the Christian faith, and I knew this boy lying in the stretcher in front of me, was somebody’s son. I hope you do not mind me telling you this. I gave your son a kiss on the forehead and said a prayer right then and there to guide him to heaven and God. I assure you, that your son did not suffer. He was unconscious all the time. I just wanted to tell you that your boy was a brave MAN here with us. He did his job well, fought well, took care of his duties, and was a trusted Infantry Soldier. I am not writing this letter to you, because I want forgiveness. I have been in the Infantry for over 20 years, and been in Iraq 4 times already. I am telling you this because it is the truth and I wanted to tell you a little about your son. Please forgive me if I am writing this letter out of place, it is not my intention. I am attaching a couple of pictures of the memorial wall we have for the 2 Infantrymen that passed away that day. We look at it every day, and we do not forget about your son and SGT Messer at all.

A tender kiss on the forehead from the rough and tumble First Sergeant to guide him home. Thank you Father for men like Pfc. Nathan Given and First Sgt. Aldo Galeana.

If you have a story, why not share it in the comments below?

A wall in the barracks to remember Pfc. Given and Sgt. Messer.

From left: The platoon’s Iraqi interpreter, Nathan, Lares and Messer. The interpreter was wounded in the attack, Nathan and Sgt. Messer were KIA.

Taps being played at Nathan’s funeral.

Note: This post was first published at Lonestartimes.com on Memorial Day, 2008. There have been more rides, too many more rides.