politics in Harris County and Texas

You are here: Home / Politics / Harris County / So let's attack Ben Hall and lose the fight for lower taxes

Harris County Republicans haven’t been known to be the smartest bunch in the room. And this week’s activities by the party highlight the petty infighting that has left the City of Houston in liberal Democratic hands for years. Here are a few links to get you up to speed:

At Monday night’s Harris County Republican Party’s Executive Committee meeting, this flyer was passed out to the attendees: 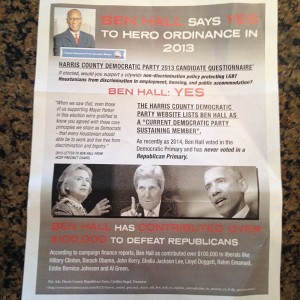 If you look close, you’ll see that it is paid for by the party. I received a heads up from a party official on Monday afternoon that this was coming down, so it wasn’t exactly a surprise. What is surprising is that HCRP Chair Paul Simpson seems to have “grown a pair” and is pushing back against the slates and social conservatives.

That, my friends, is what this is truly about. I’m impressed that Brainy came so close to figuring it out:

The Republican establishment is pushing back against the rebels. Or as I would prefer, the anti-Hotze, anti-Woodfill caucus going after the conservative front-runner.

Simpson beat Woodfill for county chair a year or so ago, and Woodfill hasn’t gotten over it. And Simpson, bullied by Woodfill’s shadow chairmanship of the local Republicans, has to respond with the only thing political parties have that holds them together: loyalty.

Well done Brainy. You got it mostly right.

This isn’t about Ben Hall so much as it is about Paul Simpson and the downtown establishment finding a relatively safe way, in their minds, to push back against the kingmaker slates of Hotze and Lowry. And, as Brainy notes, it lets Simpson poke Woodfill in the eye. Plus, it has the added benefit of allowing Simpson to push social conservatives as a whole to the side, as I told you he would.

Republicans are so stupid. By attacking Hall, Simpson gets his jollies (heh) but loses the strategical war for a more conservative Houston mayor. There is ZERO chance that either Bill King or Stephen Costello will be in the runoff. ZERO. Ben Hall at least has a path to get there, IF Republicans vote strategically and do not engage in the silliness that Simpson has decided to engage in.

Think about it. What makes King a Republican? Certainly not his primary voting record. Certainly not his “Unapologetically Moderate” stances on issues important to Republicans. The guy seriously can’t decide whether or not HERO is a good law? Seriously? No wonder Hall called him the Waffle King.

And Costello? While I personally think he would make a very good mayor, he can’t get there from here. Too many Republicans detest him for trying to do something about the city’s crumbling infrastructure by pushing the “rain tax”. Hey, at least he tried to address the problem. But sometimes, those that try are the ones left looking in from the outside.

So those of us that are both fiscal and social conservatives are left with one and only one choice: Democrat Ben Hall. Hall has never claimed to be a Republican. He has claimed to be a conservative Democrat and he is the ONLY candidate in the race pushing both social and fiscal conservatism. If Republicans would use their heads instead of their partisan biases, they would see that the best thing for them to do is to vote for Ben Hall and try to get him into the runoff.

Why do you think Brainy and Kuffner are so happy with Simpson’s attack? Because if it is successful and people buy into it, not only will we have yet another free spending liberal mayor, it will also drive down turnout on the HERO issue, which is exactly what Democrats are hoping for. The Campaign for Houston is doing a great job at highlighting that issue and increasing interest in voting. If we lose and HERO becomes law, Simpson will be hailed as a hero for his work by the left.

My goodness. Simpson, his executive team that approved this, and the downtown establishment need to suck it up and forget about Woodfill, Hotze, and Lowry for this election. Poke them during primary season all you want.

Sometimes “growing a pair” means you have the courage to do the right thing for the whole group and forgetting about that chip on your shoulder.

Houston conservatives, be they Republican or Democrat, need to vote strategically in this election.